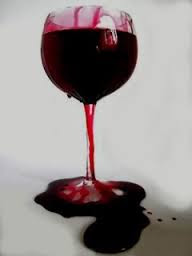 Let's all raise a glass to the Vampire genre! Here are our top 5 favorites... And no, no Interview with a Vampire.  Tom Cruise gives me the willies, and not in a good way.  And no Bram Stoker either.  Love it, but points off for being long as fuck.  It's called editing.

5. Fright Night
The original wins here, but the remake was shockingly decent.  But let's focus on the '85 incarnation, shall we?  Basic set up: A teenage boy notices his new neighbor sprouting fangs and biting his date.  He tries to convince his pal and a washed up tv host (of "Fright Night", natch) to help him.  Needless to say, it's hard to convince your friends, let alone strangers, that there is an alarmingly good-looking vampire living next door to you and to help you kill him with a stake.  I love this movie.  Chris Sarandon is awesome as the bloodsucking lead, as is Roddy McDowell as the old TV host, but in my book, Stephen Geoffreys wins this whole fucking movie.  What a weirdo he is, and I mean that in the best possible way.  His creaky, manic voice and odd laugh, and just generally off-putting vibe make him the perfect '80s horror dweeb. If you don't agree, watch 976-EVIL and Fright Night in a double feature.  What makes him extra awesome and bizarre, is that he went on to have a successful career in porn!

4. The Hunger
Have a craving for something a little more....adult?  The Hunger is about vampires, but it's kind of about the fear of aging, or loss of good looks or something like that.  All I have to say is this: Catherine Deneuve and Susan Sarandon get it on. Also David Bowie.  To paraphrase Gaga: Jawlines for days.  Hot stuff. If you are into pasty blondes.  Aren't we all?


3. Let the Right One In
Oh, this movie. This.  This fucking movie.  I. Love. This. Movie.  It does not move quickly.  But watch it till the last frame.  You won't be sorry.
Yeah it's Swedish, so yes, there are subtitles, but don't be a philistine. And the American remake "Let Me In" was not as good. And I'm not just being a remake snob.
The basic story is: Oskar is a weird boy with an unfortunate haircut who is lonely, his parents are separated, and he gets teased at school.  His new neighbor (notice a theme here?) is a weird girl named Eli, who lives with her dad, and doesn't seem to go to school or really ever leave her apartment during the day.  They become best friends. It gets weird.  Then it gets amazing. Close your eyes right now and picture the bully from your childhood. Got it?  Ok, watch this movie.  That is all.


2. The Lost Boys
This may be in my top 5 favorite movies of all time.  Keifer Sutherland, both the Coreys, an absolutely amazing soundtrack, the dude who played Bill from Bill and Ted, and Jason Patric in his fucking prime.  My god, I want to go watch it right now.
Two brothers and their mom move in with their taxidermist grandpa in a small, weird town where people seem to go missing frequently. The younger brother (Corey Haim, may he rest in peace), makes friends, sort of, with the Frog Brothers (one of whom is Corey Feldman, sadly still with us on this mortal plane), who warn him that the town is full of vampires.  The older brother, played by a smoking' hot Jason Patric (still alive? I have no idea), makes friends with a different crew.... who only go out at night.... and live in a cave.... and are led by a very pale and ominous Keifer Sutherland.  You can see where this is all going.  Anyway, yadda yadda, Dianne Wiest, Edward Hermann, the '80s were amazing, amen. Watch.


1.  Near Dark
Yes.  Near Dark. Is my number one pick... my all time favorite in the vampire genre.  Directed by Catherine Bigelow, who is awesome, this is an amazing movie.  Adrian Pasdar stars as a young guy who falls for a thin, pale blond.  She seems to be traveling with a pack of hooligans, possibly against her will. Yep, just traveling around in a big RV with, oh, you know.... Lance Hendrickson, and Jenette Goldstein.  What? Yes.  If you are a fan of the Alien movies you'll understand.  Oh, and also Bill Paxton, in a tour de force.  I don't ever want to see Bill Paxton act in anything again, unless he's maniacally screaming and covered in blood. Truth.  Oh and also, the creepiest child actor ever to walk the Earth, Joshua Miller.  You might remember him as the creepy little brother in River's Edge.  Or the creepy little brother in Teen Witch.  Fun fact: He's Jason Patric's real life (creepy?) little brother.  Adrian Pasdar foolishly gets involved with the thin, pale blond.  Men.... when will they learn? Brunettes, boys....brunettes.


That's all, my bloody valentines!! Did I miss your favorite?  What's in YOUR top 5?
Hugs and kisses....
~Creepy Carrie